It all started in Gothenburg, Sweden back in 2003: the EF-embryo had already been active for a while, but when new members joined the group, the distorted guitar riffs and heavy drumming gave way to a more dynamic sound rich with haunting melodies and harmonies… EF was born!

The band started to tour all over Europe and quickly built up a steady fan base… somewhere along the line, people started calling their approach to music „post rock“. Over the years, EF played bigger and bigger venues and shared the stage with bands like Red Sparrows, The Album Leaf, 65daysofstatic, This Will Destroy You and many others. The band also started playing festivals and moved a further few steps up the ladder.

Although the sound of the band has evolved away from the core-ish tunes of the early days, EF have always kept the hardcore ethics alive: over the years, they have proven that the DIY‐ethic is very much for real by getting worldwide distribution sorted, and by selling thousands of records without even being signed to a record company!

2010 became a busy year: EF released their critically acclaimed third album “Mourning golden morning” – recorded and produced by Magnus Lindberg from Swedish post metal legends Cult of Luna. This album displayed a great deal of progression: There were still the typical EF – melodies and harmonies, carried by heavy drumming and dispersing into vast sonic eruptions… but the sound had grown and become somehow more focused, yet more intricate at the same time.

“Mourning golden morning” was critically acclaimed by media all over the globe. The band supported the release with extensive touring throughout Europe and Asia. The experience and confidence gained from 16 (!) tours to date has made the band become an explosive, energetic and extremely tight live band.

One of the amazing things about EF is that they are sweet and heavy at the same time; that they can convince an indie or post-rock crowd as much as a metal crowd. And unlike a lot of their fellow post rock band colleagues suffering from delusions of grandeur, EF know how to party! A wasteful backstage wingding in St Petersburg in February 2012, including several members of EF and The Ocean, resulted in the commitment to release this record on Pelagic.

The 25 minutes of music on this 10“ record were recorded at the legendary Svenska Grammofonstudion in Göteborg by Oskar Lindberg (Soundtrack of our lives, Jeniferever, I’m from Barcelona) and once again mixed and mastered by Magnus Lindberg of Cult of Luna fame.

We have no delusions of grandeur when we say that these tunes are going to be groundbreaking for the band. 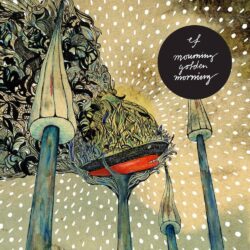