“I walk 47 miles of barbed wire/ I use a cobra-snake for a necktie/ I got a brand new house on the roadside/ Made from rattlesnake hide/ I got a brand new chimney made on top/ Made out of a human skull/ Now come on take a walk with me, Arlene/ And tell me, who do you love?” Bo Diddley – ‘Who Do You Love?’

Where does the story start? It starts with an explosion that puts us in close proximity to death and then, after that, there is silence. And what should we fill that silence with? How about the revving of a van engine, some transgressive surrealist poetry and Bo Diddley on the stereo…

Kjetil Nernes is a survivor. He is, for all intents and purposes, the Norwegian rock band Årabrot, who formed in Haugesund, Norway in 2001. After stalking the blackened, grimey European noise rock underground for years, a rupturing change came in the form of serious illness in 2014. After contracting a rare and aggressive form of cancer, he nearly died; but the lengthy, painful experience of treatment and recovery gave him the time and space to reconsider his entire life… including his artistic practice.

Speaking from the deconsecrated church in Djura, Sweden, where he lives with his wife, the musician Karin Park and their young daughter, he describes how the illness changed everything: “I struggled out of that period of extreme sickness by writing the last album The Gospel (2016). It was like a big explosion. Because after an explosion you have silence. And in the silence you realise that everything has changed. In that silence, the new record was written.”

Since 2016, Nernes has been collecting up the shards of his creative life and rebuilding them in a totally different form. He says: “After I recovered I went on a 31-date tour of England with the writer John Doran and that experience helped inspire the new record. We listened to a lot of music on these really long drives up and down British motorways – Funkadelic, the Norwegian death metal band Cadaver, ‘electric’ Miles Davis, Slayer, Nick Cave And The Bad Seeds but the one artist we kept on going back to was Bo Diddley. And that’s where the album title comes from. This idea of a rebirth and a return to the fundamentalism of rock & roll. We must have played the song ‘Who Do You Love?’ 300 times. After being so ill I was really full of hope and optimism. It felt like being a teenager again, getting on the road and falling in love with rock & roll. It went on for so long though… there was a lot of fatigue, anxiety and neurosis as well. It really was a unique experience.

“Every night we’d stop in a new town and do a gig with different artists and they all had these great stories to tell, and some of them fed into the lyrics for Who Do You Love. I guess the album is like an anthology of other people’s stories that I’ve only half-remembered and then rewritten as my own.

“One night we played a show with Sarah Angliss, a composer, sound designer and robot builder, and afterwards she told me a story. Out of the scraps I could remember, I wrote ‘The Dome’. It’s about a character who falls in love with the sound of an imaginary lover. He builds a dome in order to recreate this echo he loves – but he can’t get it right and it drives him mad. By the end of the song he fires a gun, hoping that the bang will be powerful enough to create the echo he longs to hear but all that happens is he shoots the wall and the bullet ricochets back into him. She told me about how years ago they used to throw bodies into the River Thames and how these corpses were dredged out of the water to make musical instruments with. This image became the basis for a song called ‘The Warning’ where the protagonist is fishing bones out of a river to make a harp which resounds so deeply it can be heard in Hell.”

Also on the road, Nernes reread one of his favourite books, Maldoror by Comte de Lautréamont. This poetic novel which was published in the 1860s was a huge influence on many of the surrealists but also had a huge impact on the singer and guitarist: “Maldoror is the most evil character in literature with the possible exception of Satan himself but he does also have this weirdly compassionate streak to him. It was fascinating to read this incredibly dark, surreal book on this tour while listening to Bo Diddley over and again. In my head the two evil protagonists got mixed up into one. So I based the whole album thematically on those two ideas and those two characters.” This can be heard most clearly on ‘Maldoror’s Love’ and ‘Uniform Of A Killer’ the songs that open and close the album.

One of the tracks on the album that really exemplifies Årabrot’s creative rebirth however is ‘Sons And Daughters’, which Nernes wrote after falling asleep in a French garden, while reading a book about the surrealist painter Max Ernst: “I had this bizarre dream about these crazy looking cylinder-shaped figures in an orange grove.” He is the first to admit he doesn’t always know what his songs are about when he first composes them: “It can be years before I realise what they’re actually about but with the case of ‘Sons And Daughters’, Jason Ward who mastered the album in Chicago, told me, ‘You’re writing about yourself here because you’re going to be a father for the first time soon. This song represents a new phase in your life.’ I hadn’t thought about it like that but it made complete sense.” One of the most striking examples that Årabrot have begun a new creative phase is exemplified by their version of the old spiritual number, ‘Sinnerman’, made famous by Nina Simone. Nernes says: “We kept on trying different styles until suddenly it clicked. As per usual there is both good and evil on the record!”

Playing a bigger role than ever before was his wife Karin Park who co-produced the album with him as well as playing synthesizers and piano and singing lead vocals on two tracks. Nernes says: “We are partners in crime now I guess… in each and every way! It started after I recovered, we decided that we wanted to do everything together because we realised then that time is short. She played a bigger role than ever before on this album. She helped me shape it.” The album was recorded between their home in Sweden and Chicago’s Electrical Audio studios with Greg Norman at the controls.

Also featured, on the track ‘Serpents’, is Andrew Liles of Nurse With Wound and Current 93; Dana Schechter (Insect Ark, Wrekmeister Harmonies Angels Of Light) adds slide guitar to proceedings; the avant percussionist Ane Marthe Sørlien Holen appears on most tracks; and the experimental Norwegian brass player Kristoffer Lo makes an appearance as well. The rhythm section is Alex Macarte (GNOD) on bass and Joakim Johansen on drums. Prepare to have your silence shattered. 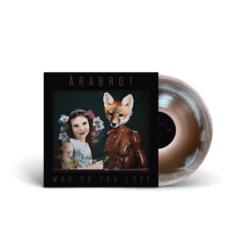 ÅRABROT – “Who Do You Love” LP 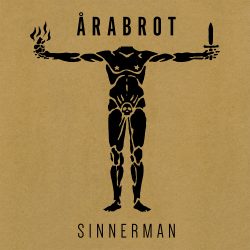 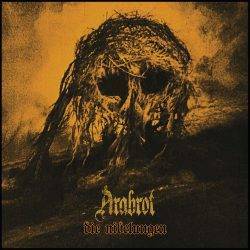