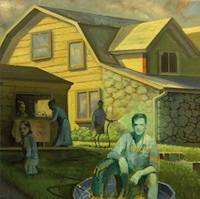 “What’s all the fuss about?”, Decibel Magazine asked… well, it’s about FAMILY!

A new leader of the Brooklyn pack, FAMILY combines lush classic rock flavor with modern progressive heaviness on its astonishing debut album, Portrait. The balance Family strikes is one perfected by precious few bands. To bring the vibes of our forefathers — the finesse, the hooks, the grooves of say, Led Zeppelin — into the modern day metal underground; to take a classic rock sense of musicality and use it to make something that’s fiercely original, crushingly heavy and not “retro” at all… this is a fine line indeed, a delicate tension that is rarely achieved.

Based in Brooklyn, Family is comprised of two native New Yorkers and two Deep Southerners, bringing together a wealth of musical influences and life experiences. Guitarist, primary songwriter, and native Manhattanite Steven Gordon writes for preeminent music blog MetalSucks. Second guitarist Joshua Lozano, a Queens native, was employed for years at the legendary CBGB, and also plays with avant-black metallers Cobalt and former Swans vocalist Jarboe. Drummer Jody Smith came to the Brooklyn metal scene by way of the funk and jazz of his hometown New Orleans and bassist/vocalist Kurtis Lee Applegate — a towering hulk of a frontman — doubles as the world’s friendliest chef from South Carolina. Together they are Family.

‘Nuff said! Now Listen to “Bridge & Tunnel”, which recently premiered on the deciblog… and then listen to the track “Bopsky” here