As a ‘heavy’ band with a significant emphasis on piano, TANGLED THOUGHTS OF LEAVING are unique within the musical landscape where they ply their trade. A strong improvisational streak, rooted in influences of prog and jazz, clashes with the aggressive nature of hardcore and noise, to form the basis of their sound. TANGLED THOUGHTS OF LEAVING, from the sparsely populated land around Perth, Western Australia, are not a post-rock band. Yes, they are instrumental, yes they are epic, yes their compositions are lengthy… but this is overall a much heavier, much more noisy, much more desperate affair.

Four years after the release of their debut album, “Deaden the Fields”, “Yield to Despair“ comes as a five-track, 70-minute portrait of the bleak, fucked-up world around us. Rather than acting as an upbeat distraction from everyday life, the album is the sound of giving yourself over to the hollowness of modern society – struggles with depression, political frustration, anxiety, sleeplessness, the decline of real human interaction and the gradual devaluation of artistic endeavour. Yes, there are moments of hope to be found – but you must earn them by enduring the noise, the grim repetition and the constant feeling of dread. You must stay for a while, wallow in it and see yourself through it.

Musically, “Yield to Despair“ is a much darker affair than TANGLED THOUGHTS OF LEAVING’s earlier releases; combining elements of post-metal, jazz, noise and doom to brutal effect, and featuring more of the brash and intense improvisational elements of their live performances, where drummer Ben Stacy and piano player Ron Pollard face each other, as if they were to fight a battle.

Following multiple headline tours across Europe and Australia, national tours opening for This Will Destroy You & 65daysofstatic, and support slots for the likes of Russian Circles, Deafheaven, Karnivool, Grails and Boris, TToL’s intense live show has earned them a cult following in the instrumental scene around the world. 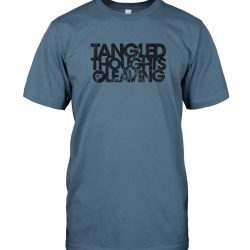