The band continues their evolution of sound by incorporating influences of ‘90’s industrial and elements of doom metal into their post-hardcore sound. The result is cathartic and innovative. Heavy, stabbing riffs crescendo into massive walls of guitars that give way to atmospheric and at times ethereal moments of calm that relay underlying messages of sabotage and deception.

Formed in 2011, after vocalist, guitarist and main songwriter Alex Estrada’s hardcore/crust band Cathedrals went defunct, SILVER SNAKES started an evolution that has blended his many influences, from Latin singer Lola Beltrán to bands like Godflesh and Ministry. So, not surprisingly,

“Saboteur,” finds Estrada experimenting with samples, synths and beats. “It’s something I have always had an interest in, and it felt like a new challenge.”

Inspired by two alternative masterpieces: Nine Inch Nail’s “The Downward Spiral” and Sleep’s cult classic “Dopesmoker”, the storyline interwoven with the music of “Saboteur” takes the listener through a pyrrhic victory of someone who, because of their own passions and goals, sabotages and manipulates for their own benefit and soon has to come face to face with the consequences of their actions.

“The idea of sabotage is something that can be applied to everyone’s lives”, Estrada said, revealing the muse behind the album’s title. “It is a human urge to want to succeed over everyone else, or to see someone not succeed just for the pleasure you get out of that…that’s what this record is about.”

While “Saboteur” is not full-on concept album, there is a common thread which ties songs like the Deftones-meets-Om track “Glass” with the hypnotically heavy riffs of “Dresden.” The mechanical, heartless feel of “Saboteur” enhances the narrative that Estrada and the band explore thematically on this release, but also runs the risk of alienating fans of the band’s earlier riff-laden albums. It is a risk

Estrada is willing to take to see SILVER SNAKES continue to push boundaries the way his musical heroes did more than 20 years ago.

“Bands like Nine Inch Nails do whatever the fuck they want because their first few records were similar and built on each other. The fact that from the get-go we have done something different from album to album is kind of a self sabotage on ourselves,” Estrada says, highlighting a crossroads the band once again finds themselves in on the verge of a new album and tour next year with Glassjaw and Coheed and Cambria.

The album also marks the beginning of their relationship with Coheed and Cambria guitarist/singer Claudio Sanchez’s label Evil Ink Records, who recently signed the band for the US, while Pelagic Records is taking care of Europe. 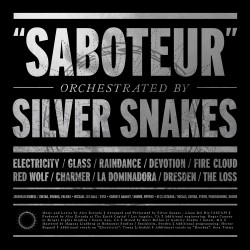