After the release of “Phase of Perplexity” in 2004 and “Technicolor” in 2010, which was produced by Kurt Ebelhäuser (Blackmail, Scumbucket), “Supra” is Dioramic’s 3rd studio album.

The band’s songwriting has steadily evolved over the years, and “Supra” reflects – so far – the peak of this evolution: we are not exaggerating when we say it is a truly mind-blowing piece of heavy, intricate yet catchy music. Main songwriter Arkadi Zaslavski’s talent has surprised friends, fans and journalists alike from the band’s early days, when they won VISIONS magazine’s “demo of the month” award.

In recent years, Dioramic have focused their activities on select support shows for bands like Meshuggah, Skindred, or Every Time I Die, as well as appearances at festivals like Highfield or Southside. The main reason why the band did not play out more was the enormous and rather time-consuming success of drummer Anton’s alter ego “Zedd”, who for understandable reasons could not keep up his commitment to Dioramic. That’s why the band recently replaced him with Paul Seidel (War From A Harlot’s Mouth), who also joined The Ocean a few months later.

The line-up issues explain the long creation phase of “Supra”, which was already recorded in 2011, but could not be finished until end of 2013. Now it’s done, and as we all know, haste makes waste!

“Supra” was recorded by Kurt Ebelhäuser at Tonstudio45, mixed by Moritz Enders at Tritonus and mastered by Robin Schmidt at 24-96 Studios. 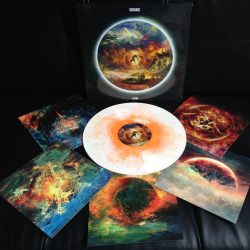